SRAM has announced an affordable gateway into their game-changing AXS groupset system – Force eTap AXS.
It is the first of SRAM’s more budget-friendly groupsets to be overhauled with the wireless, electronically operated AXS technology, launched by the US component manufacturer in February.
AXS has been available for its top-end road and MTB platforms, Red eTap and Eagle (XX1 and X01) for some months. Along with a host of technologies, it features customisable operation, interchangeable tech, and the first cable-free dropper seat post.

AXS users have also had the opportunity to interchange Red eTap AXS components with those from Eagle AXS, such as shifters and derailleurs, providing the perfect gravel bike set-up. Now that tech is available for the more affordable SRAM Force.

The inclusion of Force eTap AXS provides an even greater range of options for those lucky enough to be currently using the AXS Red or Eagle platforms (or both) creating a truly viable ecosystem of components for riders of any discipline.

While you’re able to swap elements from each of the AXS groupsets, they all share the AXS app. This allows you to interface with the drivetrain to program and personalise how the system operates, like assigning different shift commands or dropper controls to either of the paddles so it suits how you ride.
You can also choose different modes, like sequential gearing, which automatically activates the front derailleur if necessary to find the next available gear. Other modes include ‘compensating’ actuation, which smooths gear transitions – when a front gear change is performed, the rear derailleur compensates for the large change in gear ratio by shifting one or two cogs to keep your pedalling cadence steady.
Link it to your SRAMid (SRAM emphasise you don’t have to do this) and you’ll get service updates and ride data, such as shifting frequency and data on things like how much time you spend on which sprocket.
Here’s a short video to give you an idea how it works.

Force eTap AXS – what are the options?

There are four basic options for Force eTap AXS, although you’ll be able to swap and change many of the parts with any other AXS system. How about Red eTap shifters with a Force eTap 2X derailleur? Or why not use Force eTap AXS triathlon aero bar Clic shifters and an Eagle AXS derailleur and cassette? We’re not sure why you’d want to combine Eagle with aero shifters, but hey, it’s your bike…

The groupset formats are:

The SRAM Force eTap AXS rear derailleur works for both 1x and 2x systems and is designed for the system’s X-Range gearing, which boosts range and chain management. Large X-SYNC pulleys and steel bearings improve durability and efficiency while the Orbit fluid damper combines with the Flattop chain (more on that later) for smoother, quieter operation.
The derailleur uses the same AXS batteries used throughout the system, so you can easily swap it out and snap it into the seat post, front derailleur, or even the AXS components on your mountain bike.
Here’s a look at the Orbit technology as featured on SRAM Red eTap AXS that will also feature on Force:

SRAM’s Force XG-1270 cassette uses X-Range ratios to optimise for electronic shifting with at least five one-tooth jumps for smooth progression.
Designed to work with an XDR driver body, it’s compatible with Zipp wheels produced after April 2015 and wheels with the rear hubs 176, 177, Super 9, and Cognition.
The cassette choices available are 10-26t, 10-28t, and 10-33t.

The Force front derailleur is completely redesigned for AXS, offering better rear-tyre clearance and SRAM Yaw trimless cage technology, allowing it to cope with gravel just as well as road set-ups. It’s also compatible with SRAM Red chainring combinations while its operation – just like the rear derailleur – is easily personalised with the AXS app.
Again, the batteries are interchangeable with any other from the AXS family.

The SRAM Force eTap AXS crankset comes in three formats using smaller chainrings with a consistent 13-tooth gap for smooth, accurate shifting. It’s available in 1X and 2X formats as well as the additional aero disc option for tri or TT riders.
Each format is easily upgraded with the Quarq DZero power meter which slots between the crank arm and spider (see below).
A DUB bottom bracket offers a durable centre of gravity for your cranks. The simple integration between chainring, crank, spindle, and bottom bracket ensures reliable and smooth drivetrain performance.
Chainrings are available in 48/35t and 46/33t formats.

One of the standout features of SRAM Red eTap AXS was the unique Flattop chain. According to SRAM, it’s straight-edge profile makes for cleaner and quieter operation, with greater shifting accuracy. Now the technology is available on the Force platform giving more riders access to the innovation.
Here’s a look at the chain in action: 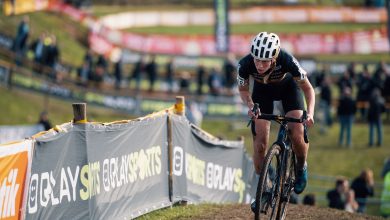 How to get started in Cyclo-Cross