Bikes have long been a favoured target of thieves and most cyclists will at some stage have experienced that sinking realisation that their precious machine has become another statistic.

If you are going to be using your bike for commuting to work, school or college you are going to need a robust lock that will at the very least act as a deterrent to any thieves looking for easy pickings. It is also extremely advisable to securely lock bikes stored in garages, sheds or outbuildings – some 80% of bike thefts are from the home, so a ground anchor and lock(s) are a wise investment.

Bike locks vary in price and design, from cheap and simple locks that can be used for popping into a shop, to highly-engineered units that offer greater peace of mind, but at a price.

Read on to find out more about the different types of locks that are available, and which one might be right for you.

Which lock is right for you?

The three main types of bike locks are cable locks, chain locks and shackle or U-locks (see below for a detailed explanation of the differences between the three).

As with most things, you get what you pay for, and the security level offered by the various models tends to increase along with the price tag. Most manufacturers will themselves provide a security rating for each model, which in terms of the respected makers at least is a reliable enough gauge of their effectiveness (some models will also carry security ratings from independent organisations).

How much you wish to invest is up to you, but it makes little sense to secure a £3,000 carbon fibre dream machine with a £3.99 lock that a child could chew through. Of course this is an unlikely scenario – and any bike called into daily action as a commuter is unlikely to be a premium model, especially if you know you are going to have to lock it in public. However at the very least buy a lock that will make would-be thief think twice, and perhaps continue along the bike rack looking for something easier to pilfer.

With premium road racing and off-road bikes whose value is measured in thousands rather than hundreds, it also makes sense to invest in secure ground or wall anchors, external padlocks and even alarm systems for your chosen storage area – all things that will also work to your benefit should you take the wise step of insuring your pride and joy.

Sadly, no bike lock will stop a thief that has time, tools and determination on his side. However you can definitely boost the odds in your favour by following some simple security rules:
• Any lock is better than none;
• Always lock your bike when out and about – it only takes a second for it to disappear;
• Lock your bike in a well-lit and public place, not a dark and quiet location where a thief can work undisturbed;
• Never lock your bike to something easier to break than a lock.

With most bike components and accessories there is a simple rule of thumb – spend more and it will weigh less. Not so with bike locks – it’s unfortunate but the better locks are made from tougher steel and components that are more resistant to attack, so they are heavier and therefore more awkward to transport. The trade-off for security is weight, but if a lightweight lock is a priority you should be able to find a decent compromise.

The three main types of bike locks are cable locks, chain locks and shackle or U-locks (there are other designs, and new innovations come on the market regularly, but the majority of locks will fall into one of these three categories).

• Cable locks: These are the simplest type of bike locks, secured either with keys or with a combination. They are lightweight, inexpensive, easy to transport and easy to use, and will certainly act as a deterrent to the casual thief. However although cable locks are better than no locks at all, it must be noted that even the better-quality armoured cables are vulnerable to being cut by a thief armed with bolt-cutters. If you are going to leave your bike locked up for a long period of time especially in a target area such as a college campus or outside a train station, a more attack-resistant lock is advisable.

• Chain locks: – These consist of heavy steel chains, usually covered with a tough fabric sleeve to prevent the chain scratching your frame – offer a step up in protection terms and are harder to breach than cable locks, but again are vulnerable to bolt-cutter attack. More expensive models will have a higher security rating. In general, chain locks (and shackle locks) are too heavy to consider for long-distance riding so tourers or sportive riders who want to secure their bikes during cake stops or overnights should look at cables (or mini-shackle/cable combo locks).

• Shackle locks or U-locks: The most durable and secure locks are the d-shaped shackle locks or u-locks, now a trusted and classic design. Most models will have a rubberised coating to protect your frame, while a high weight is an indication of armouring. Essentially a giant padlock with which you attach your bike’s frame to a fixed point such as a lamppost or bike rack, the shackle lock is much more resistant to being cut than cable or chain locks. Many manufacturers offer combination cable/shackle locks which enable the bike’s wheels to be secured to the shackle, via a looped cable.

Bike lock tips
While shackle locks are generally regarded as the sturdiest of the three main types, they can be subjected to leverage attacks, where a lever such as an iron bar is inserted inside the ‘u’ of the shackle and used to prise the lock open. Better-quality shackle locks will be made from tougher, heat-treated steel and more resistant to being opened in this way, but you can also help by locking your bike in a way that gives the thief little room for manoeuvre. Try not to leave too much free space inside the shackle once it is locked, and don’t use a lock with a shackle that’s too big (hence the popularity of ‘mini’ u-locks). Basically, if it is awkward for you to unlock, it is doubly awkward for a thief to lever it open.

Because only the largest shackle locks will allow frame and wheel to be locked to a post, cables – especially the better-quality armoured types – can be useful for securing both wheels to the shackle.

Being heavy, rigid and bulky u-locks – especially good ones – can be a pain to transport. Most manufacturers will supply a bracket to attach them to your frame, but check that it will fit (if, for example, you have a full-suspension frame).

When choosing a shackle lock look for the best security rating you can afford. A lock mechanism in the centre of the barrel to which the shackle attaches is more resistant to drill attacks than a mechanism at the end of the barrel. Avoid cylinder locks as they have been proven to be vulnerable, and make sure you get more than one spare set of keys. Some brands offer a replacement service so keep the supplied key code where you can find it.

Cable locks
Lightweight and inexpensive, these are vulnerable to being cut but better than no lock at all.

Chain locks
Heavy steel chains offer the thief a bigger challenge than cables, but can be awkward to lug around.

Shackle locks or U-locks
Essentially a giant padlock for your bike, made of armoured steel. The most secure type of lock but still no guarantee against a determined thief.

Ground anchors
Steel fixtures which provide a secure and permanent point to which your bike can be locked in the shed, yard or garage. 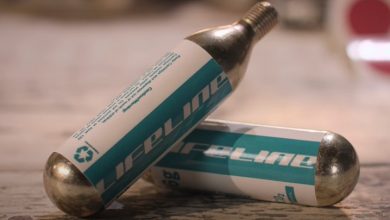