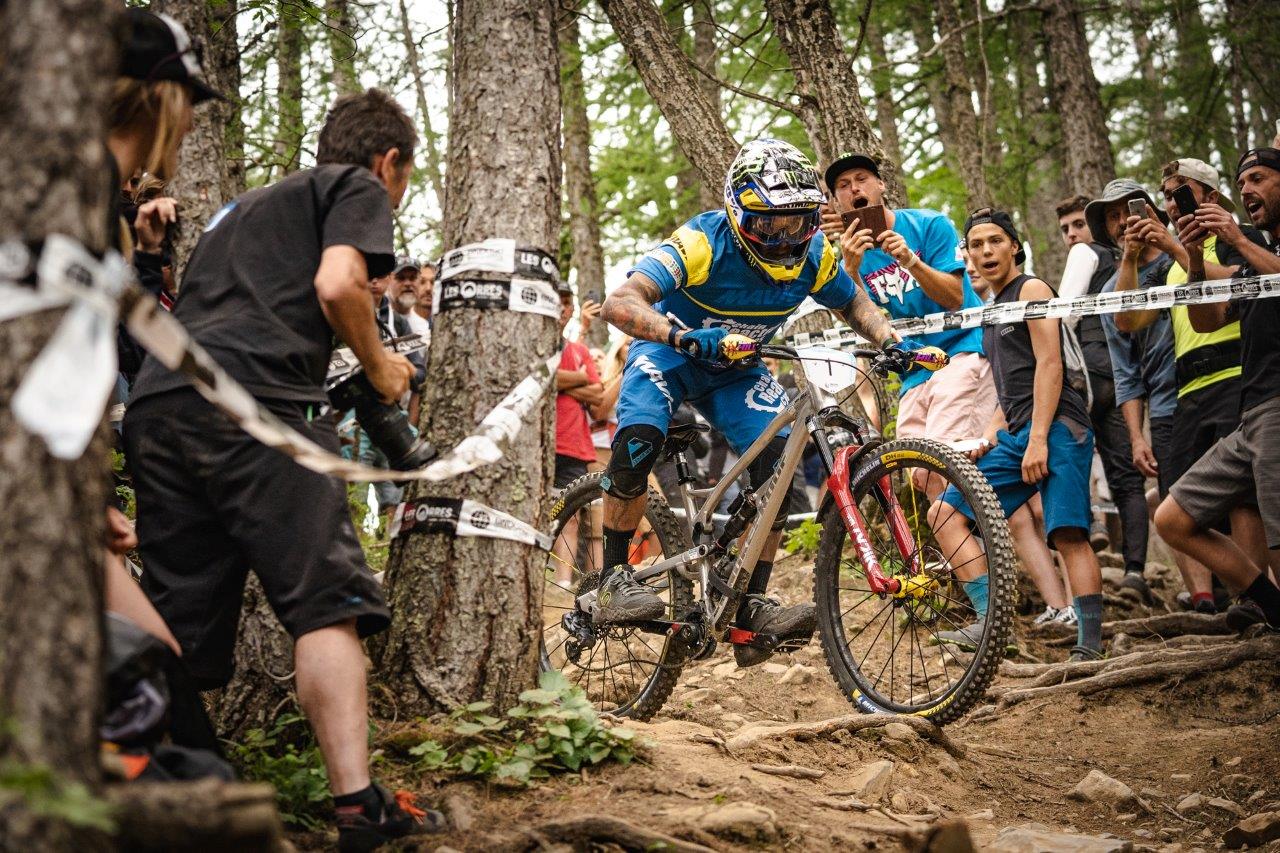 World Champion Sam Hill managed to overcome a potential disaster with an astonishing comeback during the latest round of the EWS, rescuing his hopes for the season.

It’s been a tough year so far for the world number one, with Sam battling a nagging cold during the early rounds.

But after clawing back his position in the standings with a fully fit run in Val Di Fassa last week, hopes were high for a podium finish in Les Orres, France.

Disaster struck, however, as yet another cold dogged the champ’s hopes of getting back on top.

And things went from bad to worse, with a badly timed tyre blow-out threating to derail all hopes of Sam remaining in the running.

But an incredible comeback on the second day saw the champ prove his quality, saving the weekend from a potential disaster.

The fifth round of the Enduro World Series took us to a new venue of Les Orres in the south of France.

It is a huge ski resort with massive mountains and some amazing mountain biking trails.

There was a bit of everything on the tracks, some super long stages, with high-speed, steep technical sections, and everything in between.

Take a look at the course maps here.

This was a two-day race with four big stages each day, mainly with chair lifts to the top but a transition from Stage two to three and a big transition from stage three to four on day one in blistering heat.

Sam, Elliott, and Kelan all liked the track in practice but knew it was going to be a super tough race.

Stage one was a great track, which everyone was looking forward to, but it didn’t go great for the team.

I started off the day first in the master category and got into a good flow until I hit a left-hand corner pretty hard and the exit was gone. I went off the bars and down a bank into the trees. My bike was tangled up in the tree and the course tape and I lost around 20 seconds before I got up and going again.

Elliott was charging hard and went fully committed into the technical rock section half-way down but got off-line a little and caught his foot on a rock, which ejected him over the bars and onto his head in a big crash, hurting his wrist.

He finished down in 119th place on that stage.

Kelan also crashed on stage one, pushing the limits but still managed 22nd place. Kelan went on to have a crash on each of the next three stages also placing 52nd, 32nd and 85th to finish a tough first day.

Sam Hill unfortunately got another cold this week and was feeling under the weather but was determined to get his first win this season.

But luck just doesn’t seem on his side this year – Sam was flying down stage one and then his rear wheel clipped a small cut of stump, bending his rim and causing it to lose all tyre pressure.

Sam had to ride the bottom half of the long track on a rear flat losing over 40 seconds and finishing in 109th position.

This wasn’t the end of his bad luck though. He had to go and fix his tyre in the allowed pit stop, but with a tight transition time on the chair lift to stage two, he was late for his start by 43 seconds (even though the lift stopped twice). Sam had to sprint the three minutes from the chairlift and drop straight into the 10 minute 30 second stage with no rest.

He still managed to place ninth on this stage but was awarded a 30 second time penalty for missing his start time.

Like the true champion Sam is, he dug in deep for the next two stages even though he knew his chances for a good result had been shattered and finished the last two stages of day one in second and fourth.

Day two came around and the heavens opened in the morning, so the race’s organisers cancelled the big stage five, which was a shame as that was a stage Sam could claw back some valuable positions and time in the race.

The rain stopped and the sun came out drying up the tracks quickly and, by the time racing started with stage six, the tracks were bone dry again.

Kelan finished 57th, 18th and 53rd on the three stages, putting him in 37th overall for the weekend. Not a bad result considering all his crashes.

Elliott Heap’s wrist was sore and weak but he decided to race and finished 52nd, 45th, and then an amazing sixth place on the final stage of the race.

This was good enough to move Elliott up to 53rd overall – not where he wants to be but, all things considered, still a great result.

This moved Sam all the way unto 12th place even with his 30 second time penalty and his 109th position on stage one.

What a comeback! It shows the determination of a true champion.

I chipped away, rode a bit tight but managed three fourth places and, my best, a third place on stage four to finish fifth overall in the Masters’ category.

So, a pretty tough weekend for the team but they all gave it 100 per cent and that’s all we can ask for.

Thanks to Jacy and Carl for all their work on the bikes and all our sponsors for their continued support. Also, thanks to Kike and Will for the photos and videos.

We have a bit of a break now before rounds six and seven in Whistler and North Star, apart from Kelan who is racing the Megavalanche, so best of luck to him next week.