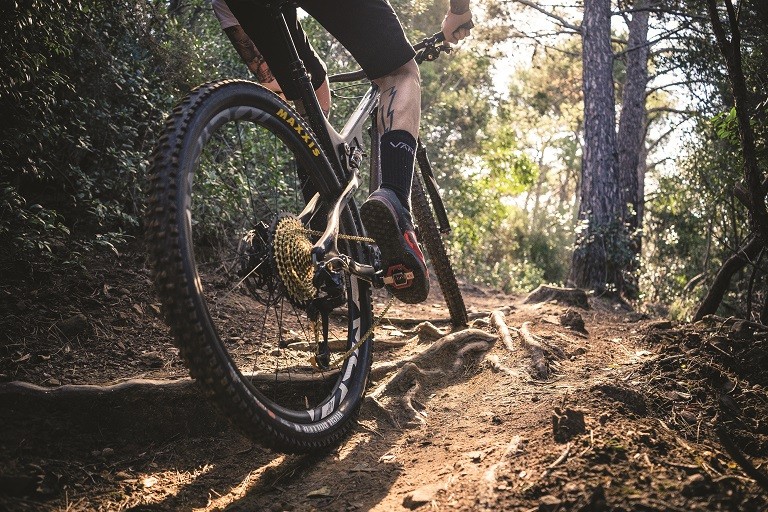 SRAM MTB Groupsets at a glance:

SRAM is the youngest of the big three component makers, which also includes Shimano and Campagnolo. However, during its relatively short existence, the US company has managed to carve out a niche with its dedication to constant innovation.

The brand was behind the ground-breaking 12-speed Eagle mountain bike groupset and the 1X system that has almost dispensed completely with the double or triple chainring on many trails. Its industry-leading, weight-saving properties, meanwhile, have made it a firm favourite with pro-riders and competitive amateurs.

After establishing its credentials with its standard MTB groupset hierarchy, SRAM created Eagle, a 12-speed option offering the full gear range of double chainrings with a single ring up front. Its popularity led to SRAM’s creation of an new groupset hierarchy off-shoot for Eagle alone, with its entry level NX Eagle completing a full range of affordability and XX1 Eagle soaring high to the top of the company’s food chain.

Well, that was until SRAM AXS came along.

The company’s revolutionary wireless system, released in 2019, made a huge impact on the trails with it’s unique rainbow colourway cassette, interchangeable battery set-up, customisable controls, and a raft of super-light tech.

Both X01 and XX1 Eagle groupsets were brought into the currently small AXS family – but could the tech find its way down to more affordable component sets? Who knows…

Here are some of the main components of a typical SRAM groupset with links to the brand’s components on Chain Reaction Cycles:

We’ve assembled the SRAM groupset hierarchy below, setting out the various levels on offer for quick reference, from entry level to high performance:

Here’s a guide to each of SRAM’s individual groupsets within their extensive MTB hierarchy.

An entry-level model in SRAM’s drivetrain selection, X5 is by no means one to ignore. It’s inspired by the company’s more race-ready offerings, and delivers smooth and precise shifting to take your off-road riding to the next level. It’s pretty common to find SRAM X5 parts specced entirely or mixed with other parts on many new hardtails and full-suspension bikes.

Things get more serious on X7, with trickle-down technology featuring heavily from higher up in the range. A Type 2 rear derailleur boasts SRAM’s Roller Bearing Clutch and Cage Lock, all complemented by X-Glide shifting – all this translates to a new level of control, precision and reliability whether you’re shredding your local trails or smashing the singletrack on a big mountain adventure.

A more lightweight, stiff and reliable option, X9 is the choice of many when upgrading to something that’ll tick both the performance and price boxes. Clean and crisp shifting is the epitome of X9, which is built to last and will look after you on thigh-busting climbs, technical descents and all day missions in the hills.

Bringing one-by 11-speed shifting to the masses, SRAM NX is the popular choice for riders on a budget who want to take advantage of everything SRAM have learned from their higher range one-by system – trickle-down technology at its finest. SRAM NX promises sharp, dependable shifting every time.

At the higher-end of SRAM’s drivetrain collection, X0 offers dependable performance and maintains accurate smooth shifting for hundreds of trouble-free miles. A smattering of carbon, CNC machined aluminium and other weight saving features makes X0 the choice of performance riders. For the more gravity-oriented out there, an ‘X0 DH’, downhill-specific option is available here too – bombproof, lightweight and durable – ready for gnarly rides in the rough.

A recent addition to the SRAM family, X01 adopts the 1×11 gearing setup (single front chainring, no front mech and a large 11-speed cassette at the rear), and promises a similar level of flawless chain management, light weight and precise shifting as the more expensive XX1 group. Because of its versatility and durability, it’s perfect for all riding styles.

One for the weight-conscious cross-country riders, XX is a feature-filled, highly adjustable group which comes with a top end price tag. Shift performance via the company’s X-Glide technology is flawless, with a mix of carbon fibre and CNC-machined lightweight aluminium combining to produce some of the most crisp and dependable gearing you’ve experienced.

Using a 1×11 gearing setup (single front chainring, no front mech and a large 11-speed cassette at the rear) XX1 is the top end of the company’s drivetrain collection. Simpler, lighter and more durable than anything before, XX1 is driven by a cutting-edge, single-ring carbon crank and delivers fast, precise shifting for 100% performance when the going gets rough.

SRAM’s Eagle groupsets offer 12-speeds and 50 teeth, providing a 500% gear ratio matching the capabilities of a double chainring in the front without the hassle or weight disadvantages. SRAM released the first weight-saving, wide gear ratio 1X system back in 2012, sparking an arms race for the creation of bigger rear cassettes. Having developed the tech that started the battle, SRAM finished the war with the 12-speed XX1 Eagle, which has gone on to conquer trails throughout the world and international competition.

The success of Eagle prompted SRAM to release more affordable versions, with the GX Eagle and the NX Eagle both added in recent years.

NX Eagle shares technologies with its higher-end birds of a feather, making it completely compatible within the Eagle component ecosystem – good news for Eagle riders looking to replace parts for less.

SRAM said their Eagle drivetrains are designed to work as complete systems, giving riders the ability to interchange XX1, X01, GX, or NX Eagle components as they desire.

GX Eagle was the first affordable bridge to 50t 12-speed from SRAM, and quickly became one of their most popular as a result. Using much of the technology from the top end groupsets without some of the weight-saving advantages of the elite XX1 and X01, GX is a reliable, high-performance groupset worthy of its place on any bike.

Built with a focus on trail riding, its quality won plaudits throughout the industry, and it remains a regular on top level bikes everywhere.

The original and still the gold standard, the SRAM XX1 Eagle is the envy of riders everywhere with its gleaming golden chain and cassette. Initially conceived with cross-country riding in mind, the XX1 Eagle offers incredible shifting quality in the toughest settings.

AXS is currently available for two of SRAM’s upper-tier MTB groupsets, Eagle XX1 and Eagle X01. The release of SRAM’s AXS for its lower-priced Force road groupset has led to speculation that Eagle GX or even NX could be next to get the electronic overhaul – watch this space…

While not the first electronic shifting system for the mountain bike (Shimano XTR Di2 was released in 2015), Eagle AXS (pronounced ‘access’) is the first completely wireless system for the trail. The XX1 version features a black cassette and is designed for trail and enduro riders. For this reason it uses stainless steel hardware and a tougher, alloy derailleur cage.

Our guide to Shimano mountain bike groupsets from Deore to XTR